⚠️ THIS ARTICLE DEALS WITH ISSUES OF ABUSE AND RECOVERY ⚠️

Until recently, I had a hard time relating to Pearl at all. The gay-as-heck slightly-too-anxious mom figure never resonated with me in the first season, even though I thought her infatuation and/or relationship with Rose Quartz was cute and tragic.

But then in the second season, things changed. The arc between Cry For Help and Friend Ship (Episodes 11 and 15 of Season 2, respectively) took a while to sink in, but finally I could see a younger version of myself identifying with her intense jealousy, grieving of lost relationships, lack of self-esteem, and deficient sense-of-self.

As a quick recap, between those two episodes, we're introduced to fusion of Sardonyx for the first time. Sardonyx is the fusion of Pearl with Garnet (which includes Sapphire and Ruby). Based on what we see of Sardonyx, it's clear that both Garnet and Pearl have a great time as that fusion, as she's fun-loving, energetic, eccentric, and entertaining. Both Garnet and Pearl smile and laugh happily after they split back into themselves - Pearl especially. 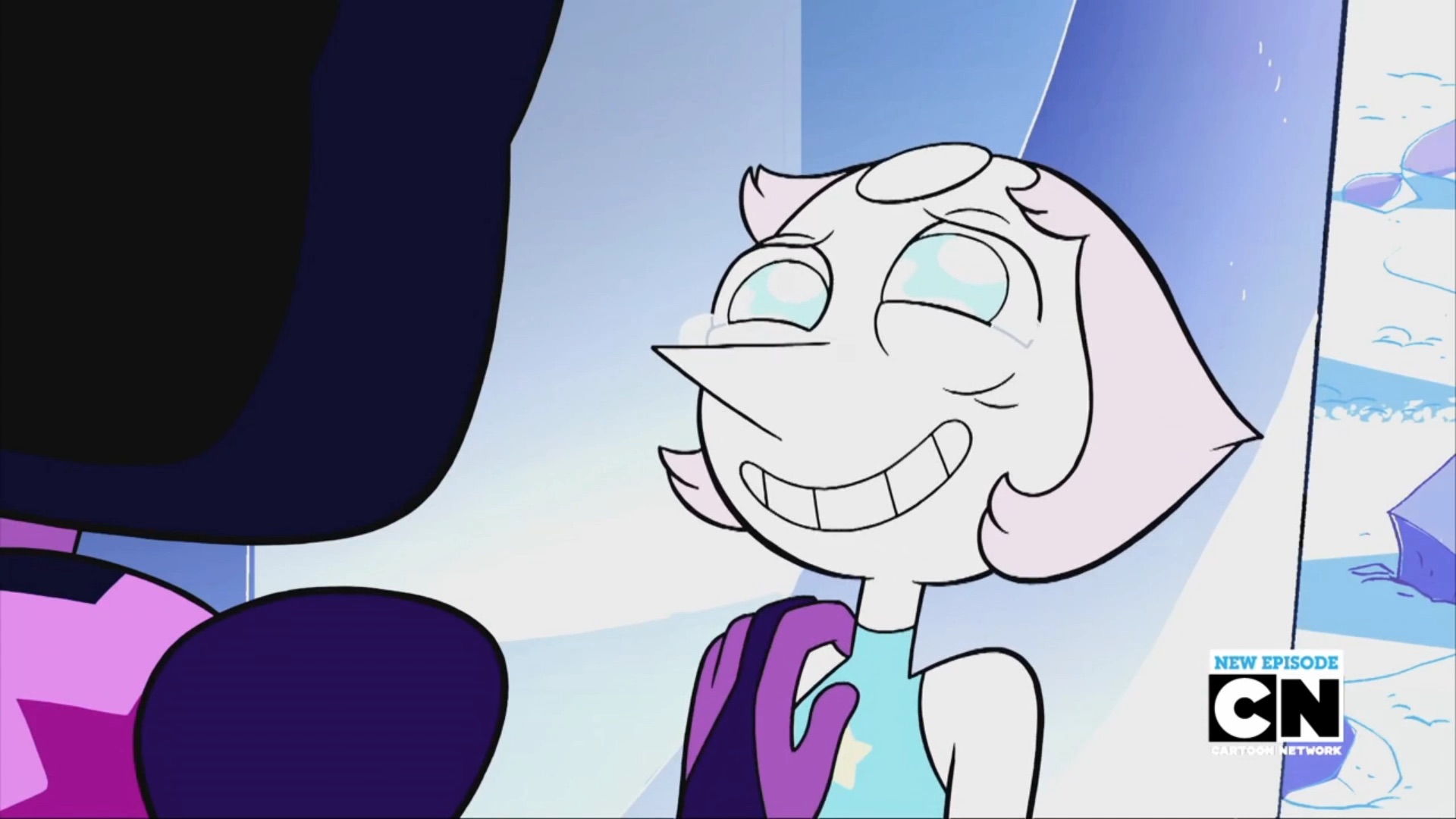 It's at this point that Pearl loses her mind and starts doing anything she can to remain with Garnet as Sardonyx, which leads to the situation you see at the end of Cry For Help, where Pearl breaks Garnet's trust, and destabilizes Garnet's internal relationship so much that she splits herself back into Ruby and Sapphire during Keystone Motel. Her obsession with being Sardonyx in Cry For Help culminates with her breaking down in front of Garnet during Friend Ship and telling Garnet something along the lines of "I'm nothing without you, I'm just a Pearl." Garnet levels with her, and tells her explicitly that she isn't the "perfect relationship" Pearl's made her out to be, and that Pearl could be her own person if she tried.

Thankfully, Garnet and Pearl work out their differences enough that they form Sardonyx again enthusiastically and happily in future episodes like Know Your Fusion. But the point remains...

...what the heck happened?

A Brief History Of Pearl

In the lore of Gem Society, Pearl-type gems are essentially status symbols. Peridot is our main source for this within the show itself, mentioning how Pearls are usually reserved for only the most upper-crusts of society, and you can also see how Blue and Yellow Diamond both have a "Pearl" each themselves (in The Answer and Message Received, respectively). Pearls are described by Peridot and Jasper in terms of being akin to automatons who have no set personality themselves, and exist only to serve someone stronger or more prestigious.

The next is a bit of theory, but I don't think it's too far-fetched. As we learn in Back To The Moon, Rose Quartz (allegedly) shattered Pink Diamond. We see in Space Race that Pearl's outfit has a pink symbol in the centre of her space-suit, almost identical to Peridot's yellow symbol in the centre of her outfit - meaning that in all likelihood, the Crystal Gem Pearl probably served someone in the highest ranks of the Pink Diamond court, or, more likely, Pink Diamond herself. Given the story of Rose shattering Pink Diamond, and the fact Pearl is seemingly and willingly bound to Rose Quartz when we see their earliest chronological pair-appearance in The Answer when meeting Garnet for the first time, I am willing to theorize that Rose shattered Pink Diamond to save Pearl.

Pearl then spends thousands upon thousands of years at Rose's side, doing everything she says, willing to lay down her life for Rose under any circumstances (as alluded to in Sworn To The Sword). That becomes her life, and Rose's mission becomes her purpose. She supplants one strong figure for another and thus she never has to break out of her original role of a servant, and this goes on for, assumably, for Pearl's entire existence.

I don't think Rose ever asked for Pearl to be so subservient to her. In fact, I'm willing to bet the opposite was true: we see how Rose values individuality and personal growth in Garnet and Amethyst, where she encourages them to look past their origins and become something new, but I don't think Pearl ever took that message to heart other than superficially. I think that once Pearl became attached to Rose, she'd nod her head at everything Rose said as if it were pure liquid gold spewing out of Rose's mouth but then default to her previous emotional patterns.

Rose may not have been emotionally mature enough to deal with Pearl. Rose was by all accounts (including those from her enemies) simply too strong to face any serious personal challenges. She shattered a Diamond, won a war against Homeworld, has a shield that can apparently survive the equivalent of a nuclear blast (mentioned briefly in Monster Reunion and The Return), and so on. She got through everything with emotional platitudes, kind words, and sheer force in varying amounts. This means that, ironically, Rose may have been a revolutionary, but seems utterly stagnant as an individual.

Pearl then stagnates as an individual alongside Rose for eons. From the chronological progression seen in the episodes of The Answer to Mr. Greg, we see Pearl go nowhere. Her entire existence is defined by Rose's ideals and beliefs, and while their views may have lined up significantly, her constant reliance on Rose's memory during the current-day happenings of the series, and her requited-yet-not romantic relationship to Rose, tell a bit of a sad story about her. 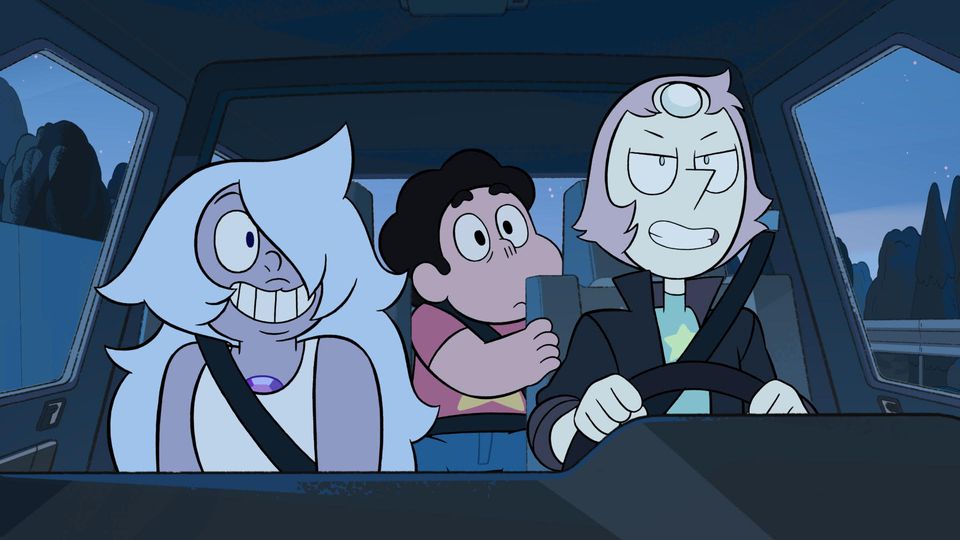 She's awkward. She doesn't know a single thing about herself at this point that isn't in relation to others. In Last One Out Of Beach City, you see her popping her collar and wearing skinny-jeans like she's an awkward dorky teenager in a rebellious phase against a parental figure she hasn't seen in over six thousand years, as if she's just beginning to explore herself and her identity. This is further played up by her body language: the awkwardness of fumbling with the cups when she tries to talk to a cute girl, breaking the rules and panicking when someone calls her on it, and dumping her life-history on the first cute person who will listen to her are all things I did as a teenager a decade ago.

Pearl's relationship-seeking behaviour mimics an emotional pattern you often find in younger people, typically formed through abuse. Her pattern specifically mimics that of someone whose formative years were spent with a narcissistic caregiver or parent. Typically, people in Pearl's historical situation are referred to as a "narcissistic supply," as they're reduced to an existence of feeding the ego of someone in a position of power over them. Canonically, she was told since conception that she existed at the pleasure of other people, only to serve them and have no sense of self or personal opinion. She existed to absorb the personalities and ideals of the people she was assigned to, without question, whoever that may be. Given Pearl's (assumed) history as Pink Diamond's personal Pearl, and given the domineering behaviours of the Diamonds we've seen so far, her behaviour becomes more understandable.

Pearl's biggest problem is that relationships feel incredibly good for her. They feel so good, in fact, that she will forego basic self-care, respecting boundaries, personal development, and nearly anything else you can think a healthy individual does to sustain themselves in favour of pursuing it. She wants to cease existing and become a part of someone she perceives as better than her. To Pearl, relationships are a substitute for personal growth, which is a complete inversion of relationships for Garnet, who views relationships as an avenue almost exclusively meant for personal growth. What feels good to Pearl - melting herself down and becoming whatever the other person wants - is exactly the opposite of what she needs.

Once she met and befriended Rose, her pre-existing patterns didn't go away. In fact, they may have been strengthened. Here was someone who was strong and dominant, but wasn't abusive towards her, which thus negated any existential need to rebel against them. Rose may also have decided quite early on that trying to force Pearl to change against her will was too cruel, and decided to simply let it go on so Pearl could be "happy." That's conjecture, but not out of the realm of possibility considering what we know about Rose's temperament.

Once Rose left, Pearl was left in limbo. She had no-one to be romantic with, and now had the added stress of being prematurely forced into the position of adoptive mother for Steven. 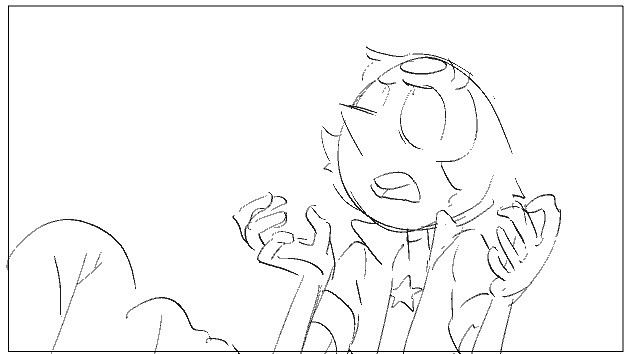 This Is Pearl's Precarious Chance

Rose leaving finally let Pearl start to grow. Considering Pearl is easily over six thousand years old, the fact Pearl has grown as much as she has in the 13 years Steven has been alive is a small miracle. She's taking chances, making mistakes, and getting messy. Garnet's intense words in Friend Ship eventually forced her to confront herself and her history in the episode Mr. Greg, which leads to her beginning her awkward dorky journey of hitting on Mystery Girl.

This is a very precarious time for her, though. Let's assume for the moment that Pearl starts dating or otherwise hanging out with Mystery Girl. Mystery Girl is essentially her praxis point; if Mystery Girl turns out to be exactly like Rose Quartz, it would be a disaster for her, but if Mystery Girl ends up being more like Garnet or even Amethyst, it could be the beginning of the rest of Pearl's life. This isn't even a shipping thing for me. Even if Mystery Girl and her just end up as Great Friends, I hope that above all else, Mystery Girl guides her along this path. Even if Pearl was somehow not gay as heck and interested in a masculine person, I'd want this for her character.

Pearl needs someone who she can be close with in some way - willingly, this time - but also won't hold her hand the entire time. She needs someone who won't simply accept a sort of status quo to keep things calm and peaceful like Rose Quartz did. Pearl would need someone who could comfort her but still push her outside of her comfort zone consistently and thoroughly in terms of encouraging her to find herself.

I'm hoping that someone does this for her, to break her out of that "narcissistic supply" relationship type that individuals like her are so often roped into. I'm also hoping that her insistence on wanting to move forward and come to terms with the past is one she's committed to and wont drop the second someone like Mystery Girl shows up and makes her jaw drop.

Let alone the implicit or explicit queer relationships within Steven Universe, you almost never see it in media where someone like her ends up healing and gaining a strong sense of self. Typically, people in that position are portrayed as permanently "co-dependent" (a word I hate) and incapable of (re)developing a sense of self-esteem or self-image. Characters like her are always tragic and always doomed to repeat their histories ad infinitum. People who grow up in narcissistic environments aren't looked upon very kindly by our society and their behaviours are chided as pathetic and disgusting despite having clear origins and a relatively clear treatment strategy.

I hope so very, very much that Pearl becomes an example of someone bucking that media trend, and becomes an inspiration to people out there who have struggled with their relationships dominating their entire senses of self-worth and self-image.